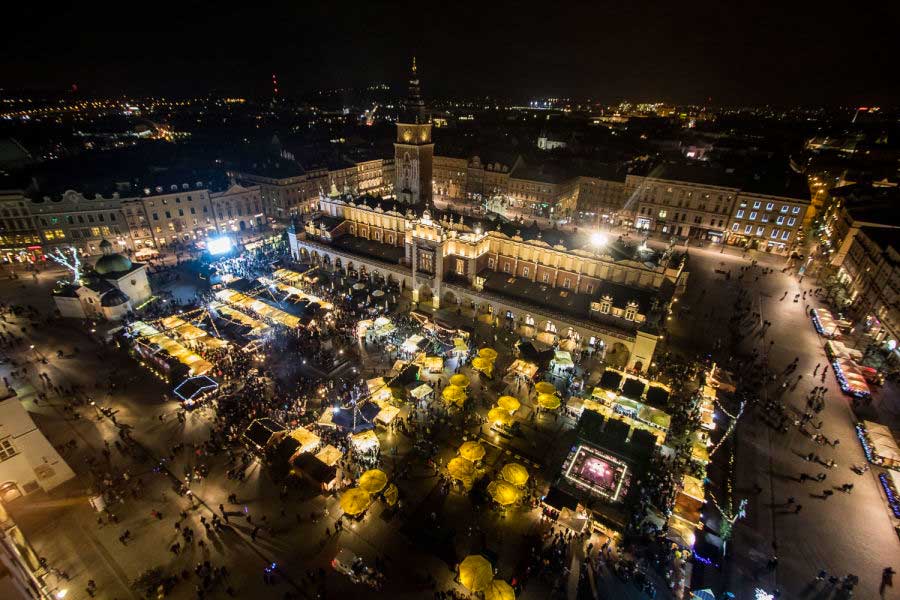 Kraków’s history spans a millennium: it was the seat of Polish kings and the capital of the country, developing into one of the key European metropolitan centres. The Old Town is an exceptional treasury of works of art, with traces of history and heritage representing nearly all architectural styles from the early Middle Ages to contemporary times.

For centuries, the Main Market Square (Rynek Główny) has been the heart of the city: the largest market square of mediaeval Europe, it has preserved its original shape since 1257, and it was entered on the original UNESCO World Heritage List in 1978. For 600 years, a bugle call has been played from the taller tower of St Mary’s Church, standing by the square, to the four corners of the world. Situated in its centre, the Cloth Hall (Sukiennice), a mediaeval shopping arcade, is one of the most recognisable examples of Polish architecture.

Kraków boasts one of the oldest institutions of higher education in Central Europe, second only to the University of Prague: the Jagiellonian University, whose students have included Mikołaj Kopernik (Nicolas Copernicus) and Pope John Paul II. Wawel Hill, inhabited since Palaeolithic times, has been an important religious centre and home to Polish monarchs since the mid-11th century. Today, with its no fewer than 71 exhibition halls, Wawel Royal Castle functions as a museum, drawing visitors with precious works of Renaissance art, among other attractions. Its arcaded courtyard, a pearl of 16th-century architecture, inspires awe and amazement.

Besides the city centre, the Kazimierz district likewise intrigues owing to many centuries of coexistence of two cultures: Christian and Jewish. Brimming with gems of Judaica of international significance, it is a place teeming with life: home to flea and art markets, and atmospheric taverns, pubs, restaurants, and cafés with live music. The Father Laetus Bernatek Footbridge connects Kazimierz to Podgórze – a district forgotten for years that has become fashionable, yet remaining peaceful and atmospheric. Nowa Huta, the most attractive and comprehensive implementation of the dreams of socialist realist architects, still surprises with the striking symmetry of its monumental structures.

Kraków is also a city with a dynamic cultural life. In 2000 it was a European City of Culture. Every year, nearly 100 festivals and other events, many of world magnitude, are held here; notably Misteria Paschalia, Sacrum Profanum, the Jewish Culture Festival, and the Kraków Film Music Festival (FMF). It is also a city of modern museums, where visitors are invited to discover history in an interactive manner.

It goes without saying that Kraków enchants with its unique atmosphere: lazy and relaxed at times, brimming with events at others, yet always exceptional and inspiring.